Embark on an endless Star Wars action experience from the bestselling Star Wars HD videogame franchise of all time.
Rush through waves of enemies on Starkiller Base with the power of your lightsaber in your hands. Storm through the jungle canopy of a hidden Rebel base on Yavin 4 with your fellow troopers, dispensing firepower from AT-STs. Line up your X-wing squadron for an attack on a mammoth First Order Star Destroyer in space. Or rise as a new Star Wars hero – Iden, an elite Imperial special forces soldier – and discover an emotional and gripping single-player story spanning thirty years. 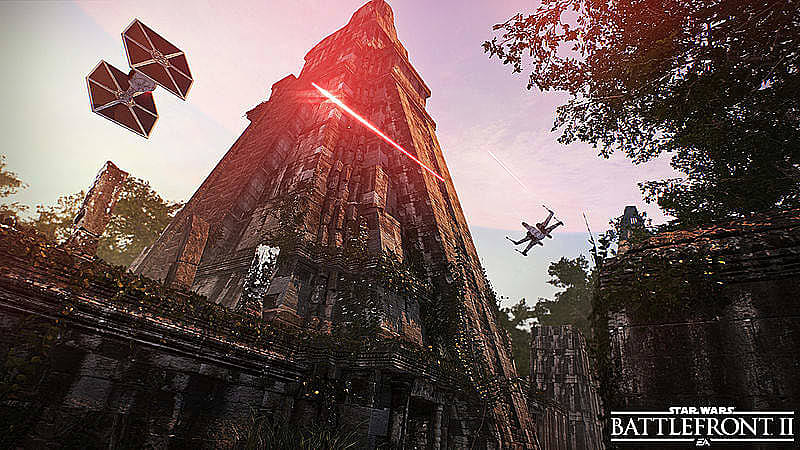 Experience rich and living Star Wars multiplayer battlegrounds across all three eras: prequel, classic, and new trilogy. Customise and upgrade your heroes, starfighters, or troopers, each with unique abilities to exploit in battle. Ride tauntauns or take control of tanks and speeders. Down Star Destroyers the size of cities, use the Force to prove your worth against iconic characters such as Kylo Ren, Darth Maul, or Han Solo, as you play a part in a gaming experience inspired by 40 years of timeless Star Wars films.
You can become the master of your own Star Wars hero’s journey. 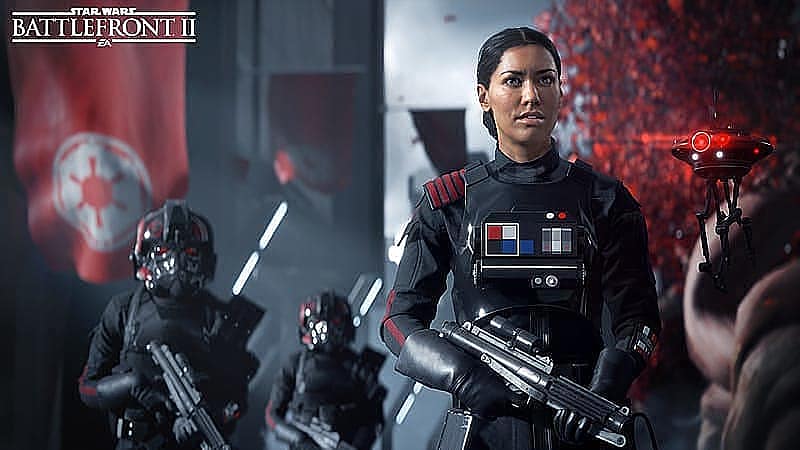 KEY FEATURES:
A New Hero, a Story Untold
Jump into the boots of an elite special forces soldier, equally lethal on the ground and space, in an emotionally gripping new Star Wars campaign that spans over 30 years and bridges events between the films’ Star Wars: Return of the Jedi and Star Wars: The Force Awakens. 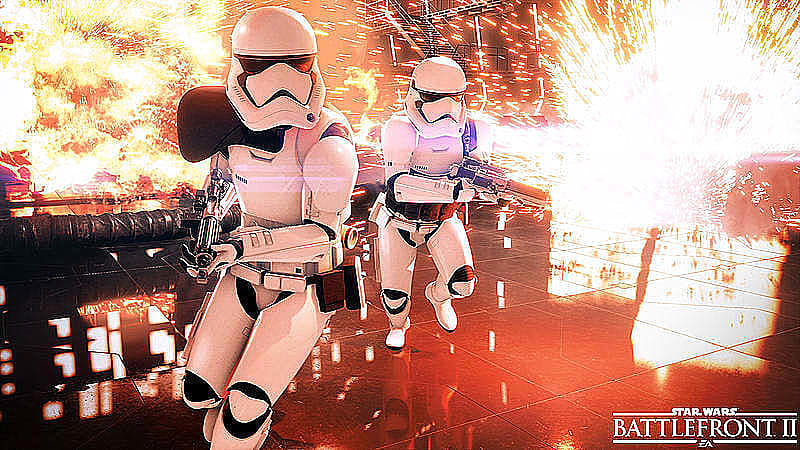 The Ultimate Star Wars Battleground
A Star Wars multiplayer universe unmatched in variety and breadth where up to 40 players fight as iconic heroes, authentic-to-era troopers and in a massive array of vehicles on land and in the air – as battle rages through the galaxy.

Galactic-Scale Space Combat
Space combat has been designed for Star Wars Battlefront II from the ground up with distinct handling, weapons and customisation options. Join your squadron and weave in between asteroids fields, fly through Imperial Dock Yards and take down massive capital ships as you pilot legendary starfighters in high stakes dogfights with up to 24 players and 40 AI ships. 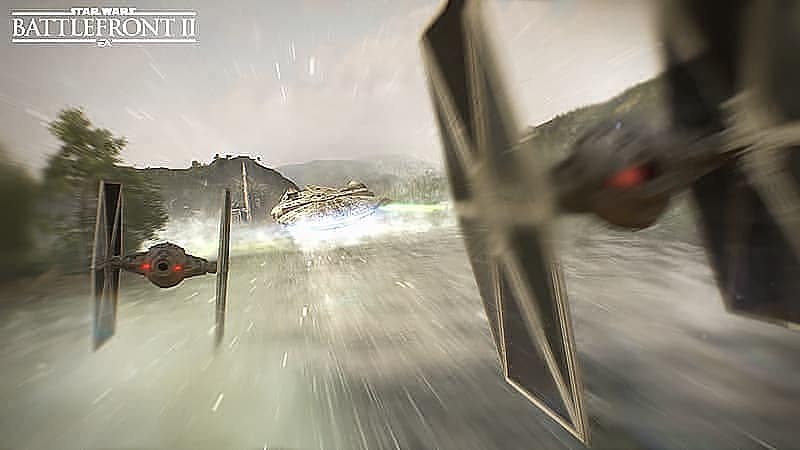 Better Together
Team up with a friend from the comfort of your couch with two-player offline split-screen play*. Earn rewards, customise your troopers and heroes, and bring your upgrades with you on the online multiplayer battleground. 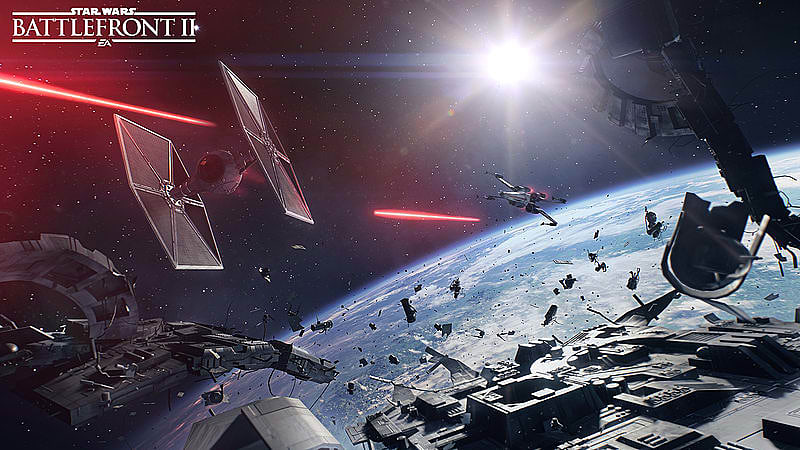 Master Your Hero
Not just an iconic hero- your hero. Master your craft with customisable character progression. Upgrade abilities unique to each hero, trooper class, and starfighter. Use these abilities to adapt and modify your character’s powers, either as lethal active effects on your opponents, helpful status boosts, or tactical assistance, to counter any opponent on the battlefront. 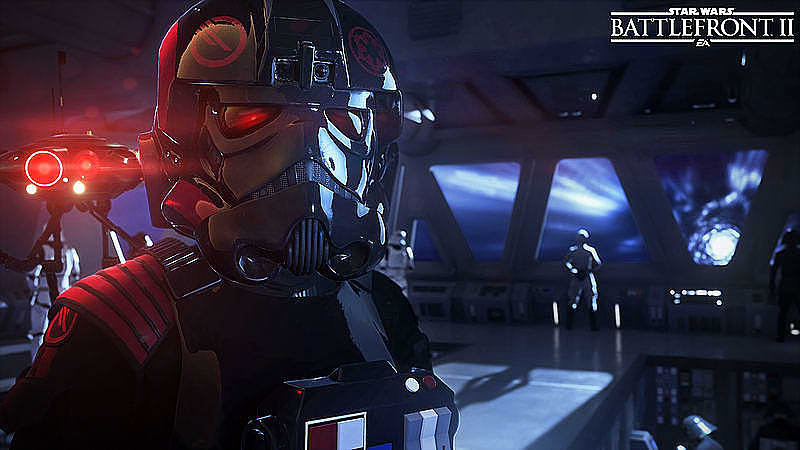 Battlefront II is not without its flaws, then, but it is leaps and bounds ahead of its predecessor. An easy, fan-pleasing recommendation for those looking to get a fix of the Force before The Last Jedi lands next month.

It’s a very difficult game to review, since it’s composed of three almost entirely separate components: a class-based online shooter, a single-player story campaign, and a multiplayer space combat simulator. Some work better than others, but if there’s one thing you can’t say about Battlefront II it’s that it suffers from a lack of content. Although Battlefield developer DICE is in charge of the main multiplayer modes, the other two parts of the game have been created by completely different studios. Motive are a new team led by Jade Raymond and they have been tasked with overcoming DICE’s poor reputation for single-player modes. As such, the five-hour long story campaign concerns an Imperial special forces team who witness the destruction of the second Death Star on Endor and become involved in the Empire’s hardline response.

As you would expect its full of superb graphics and amazing attention to Star Wars detail. Starfighter Assault is excellent and the story mode is a good effort.  and theres plenty of game modes.

The story that transpires goes in exactly the direction you assume it will, but it has heart and is well acted. However, it quickly undermines its own attempts to tell a story from an Imperial perspective, and there are so many one-off missions where you’re controlling a major character from the movies that the lead protagonist begins to fade into the background. And while the graphics are absolutely outstanding, in terms of gameplay there’s really nothing out of the ordinary for a first person shooter – with far too many moments where you just have to hold your ground and wipe out waves of mindless enemies. Without the veneer of Star Wars gadgetry and sound effects the campaign often seems rather old-fashioned and unimaginative. The gunplay is also disappointing, with very flat controls that pale next to games like Destiny or Wolfenstein. It’s not actively bad, but the weapons lack feedback or any sense of weight, and it really doesn’t feel like what you imagine using a blaster would be like from watching the films. Which stands in direct contrast to the starfighter sections – which are a childhood dream come true.

There are several moments in the story where you end up controlling a spaceship of some sort and it’s always a highlight. But the game also has a separate mode called Starfighter Assault, developed by Burnout creators Criterion. Unlike Fighter Squadron from the first Battlefront there is no deathmatch option, but instead a series of objective-based maps that play very differently depending on what side you’re on. Sometimes you’re simply defending and taking down enemy fighters, other times you’re attacking a First Order Star Destroyer in the middle of an asteroid field or fighting on the ocean planet from Attack Of The Clones. Once again, all of this looks fantastic but what really impresses is how relatively complex the controls are. Rather than having pre-set manoeuvres to evade missiles and enemies you have to do all the piloting yourself, which allows for a rare degree of freedom.

We imagine a lot of people have heard the complaints about loot boxes and assumed it’s all a fuss about nothing. But it’s not just that the loot boxes feature non-cosmetic upgrades, that give you a clear advantage over other players, it’s the fact that the whole progression system is based around their use. You level up classes as you play, but all this does is unlock things like extra card slots. In order to actually gain a new ability or buff you have to obtain it randomly from a loot box. The game turns this into a horribly complex affair involving three kinds of in-game currency and constantly quitting out to the main menu to actually buy and open the boxes. All of this would be extremely irritating and non-intuitive even if everything was free. But it’s not.

EA has added a few safeguards since the initial fan protests, and lowered the prices for unlocking hero characters, but the fact remains that if you spend a lot of money just buying loot boxes with real money, rather than earning in-game currency, you get an immediate and significant advantage. (Although even when you buy a loot box with real money its contents are still random, so goodness help anyone that is both poor and unlucky.)

Whenever you die you’re shown exactly what star cards the other person is using, which EA presumably thought would be helpful and/or an incentive to get more of your own. But when you see you’ve been killed by someone with ultra rare and super powerful cards you realise you never really had a chance, especially as anyone playing at the moment clearly hasn’t had time to obtain them just by playing. In the ground-based modes getting killed again and again becomes a deeply depressing experience where you begin to blame every mistake on loot boxes, whether it was their fault or not.

The whole progression system is completely poisonous to the game experience. The system is unfair by design, and for the sole purpose of trying to tempt people into spending more money on loot boxes than they ever would on the game alone or a season pass. And just saying that you won’t use them means nothing, because as long as other people do there can never be any such thing as a fair fight. And it’s all such a terrible shame given the decent single-player, and excellent Starfighter Assault. The ground modes, including the centrepiece Galactic Assault, do have their own unique problems though, in part because of the unremarkable gunplay and slower movement compared to most other online shooters.

The ground combat is still undeniably entertaining though, with a variety of different objectives for each Galactic Assault map and a wide range of other modes, including the return of Heroes vs Villains and an Arcade mode against computer-controlled enemies.

If you’re competing in a game and the primary factor which determines whether you win or lose is how much money you’ve spent then what you’re left with isn’t a first person shooter its an E.A. cash machine

FOR :- Superb graphics and amazing attention to Star Wars detail. Starfighter Assault is excellent and the story mode is a good effort. Plenty of game modes.

AGAINST :- rip off and awkward progression system, whose reliance on luck and microtransactions destroys all sense of fairness in online gameplay

CHECK OUT OUR STAR WARS MERCH