What is Windows Mixed Reality?

While Microsoft has picked the “Mixed Reality” naming for its initial headsets, they’re only capable of virtual reality experiences right now. Microsoft’s range of headsets are similar to the Oculus Rift and HTC Vive, and many manufacturers are selling bundles that include touch controllers. The main difference between the Vive / Rift and Windows Mixed Reality is that the headsets do not require separate sensors.

Microsoft is offering movement tracking (six degrees of freedom) without the need for traditional external sensors placed throughout a room. Windows Mixed Reality headsets have cameras and sensors to track the motion controllers. This is great for plugging headsets into a laptop for taking VR to a friend’s house, but the lack of external sensors means Mixed Reality doesn’t do a good job of picking up movements in games where you place your hands behind your back.

Microsoft has picked the Windows Mixed Reality name because it believes the experiences of virtual reality and augmented reality (HoloLens) will eventually blend together. While the existing Windows Mixed Reality headsets don’t offer any augmented reality experiences or a passthrough mode like the Gear VR, more headsets will arrive in the future that are more capable.

what about Windows Mixed Reality headsets?

Most of the main PC makers are creating Windows Mixed Reality headsets, and a number of them are available to purchase today. Acer, Asus, Dell, HP, Lenovo, and Samsung are all creating headsets, and the cheapest will be competitively priced relative to rift and vive . Not all will come bundled with wireless motion controllers, and not all are created equal with the same comfort and specs.

Acer was the original developer headset for Windows Mixed Reality, and it’s also one of the more basic of the bunch . You get a resolution of 1440 x 1440 per eye, an LCD display, and a 95-degree field of view. It’s a combination of blue and black on the outside, and compact enough to place in a backpack. You can take a look at our review and price check and   Acer’s headset here.

HP’s headset is similar to Acer’s in terms of specs, but with a Tron-like design. HP is also selling the headset as a bundle with the motion controllers . Just like Acer, it’s a resolution of 1440 x 1440 per eye, an LCD display, and 95-degree field of view. You can check them out and look at the price and read our review here    HP’s Mixed Reality headset.

Lenovo’s Explorer headset is one of the lightest Windows Mixed Reality headsets available. While it has a resolution of 1440 x 1440 per eye, Lenovo has pushed the field of view to 105 degrees on the LCD displays. It’s one of the more affordable and comfortable Windows Mixed Reality headsets available. You can check out the system read our review and check out the latest price here  Lenovo’s Explorer headset .

What PC do I need for Windows Mixed Reality?

You won’t need a high-end gaming PC to use Windows Mixed Reality. Microsoft has kept the minimum specs low for basic apps and VR experiences, but for the top games you’ll need a more powerful PC. For the basics, you’ll need a PC with the Windows 10 Fall Creators Update installed, an Intel Core i5-7200U processor or better, 8GB of DDR3 RAM or better, 10GB of free disk space, an Intel HD Graphics 620 or DX12-capable GPU, and HDMI 1.4 or DisplayPort 1.2, as well as a USB 3 port and Bluetooth for the controllers. This basic spec will provide 60 frames per second performance, and for 90 fps you’ll need a PC capable of the Windows Mixed Reality Ultra spec. 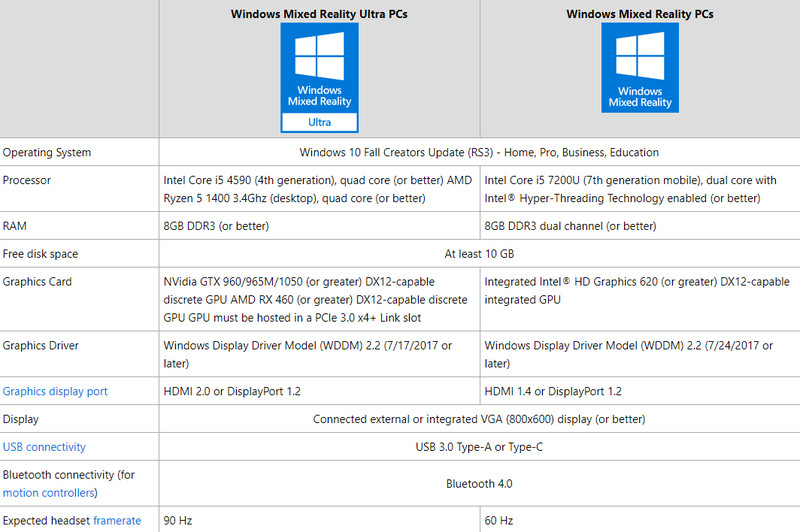 Windows Mixed Reality Ultra PCs will need an Intel Core i5 4590 (fourth generation), quad core or better, 8GB of DDR3 RAM or better, 10GB of free disk space, and an Nvidia GTX 960/965M/1050 or AMD RX 460 or greater graphics card. You can check to see if your PC is compatible by installing the Windows 10 Fall Creators Update and running the Mixed Reality Portal app

What apps and games can I use in Windows Mixed Reality?

Microsoft is using a virtual Cliffhouse as its portal for games, apps, and holograms in Windows Mixed Reality. The Cliffhouse will let you launch content, watch movies, and pin holograms in a virtual environment. Think of it as your virtual home. Microsoft is supporting apps and games from its Microsoft Store initially, which means you’ll be limited to what’s available for Windows 10. You can also run your desktop PC in the virtual environment, and access Microsoft Edge for web browsing.

VR Games like Arizona Sunshine and Superhot VR are available today, alongside a Halo Recruit VR experience. Apps like Littlstar and Sliver.TV are also part of Microsoft’s Mixed Reality launch. Most of the games will come with SteamVR support. Microsoft is working with Valve to support this in Windows Mixed Reality, but this won’t be available in beta until the end of the year ( 2017 ). If you’re opting for Windows Mixed Reality right now, you’ll be limited to the Microsoft Store and Microsoft’s built-in Windows 10 apps for now.

Have fun in the new virtual mixed up world, its all getting very interesting for us tech heads and game nuts isn’t it.

if you would like to comment on anything within vrtechreviews  please drop us a line at  thevrprof@gmail.com we love to hear from you.